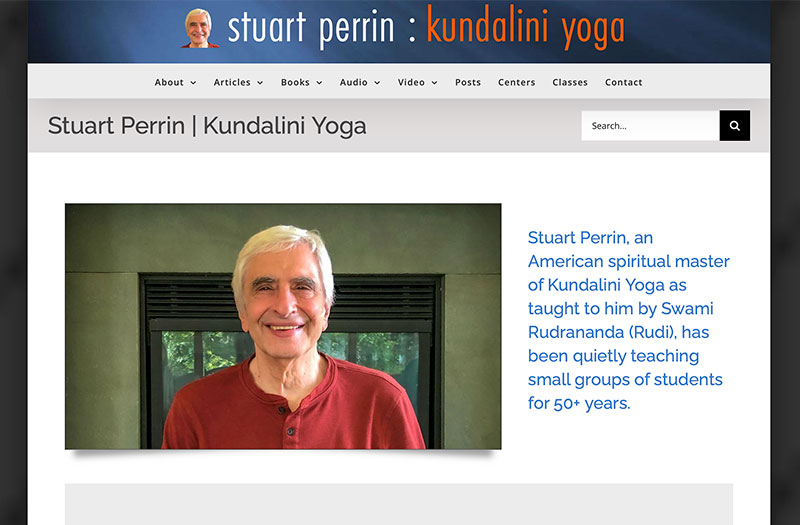 Stuart Perrin is an American spiritual master of Kundalini Yoga who has been quietly teaching small groups of students around the world for the last forty-five plus years. He studied under Swami Rudrananda, more commonly known as Rudi, for six years. Stuart was at his side at the moment of Rudi’s death in an airplane crash in 1973.

Stuart offers classes and lectures, having two-day intensive meditation intensives many times a year around the country. Stuart is a long-time writer and author of eight books (the ninth on the way) and many essays — both fiction and non-fiction — weaving his understanding of inner work and affairs of the heart with equal dexterity.

Stuart writes about his practice: The awakening of kundalini can’t be an isolated experience fed by a need for something cosmic. It is part of a healthy spiritual evolution of consciousness if it coincides with the awakening of the deepest elements of our own humanity. If it’s the end result of an organic, day-by-day development of one’s chakra system, kundalini becomes a vehicle for the human soul to connect with the divine.

The Stuart Perrin website has also seen a third complete refresh and redesign in 2022, having transitioned from an HTML site that Webworks had designed in 2010. The latest site permits updates by both Webworks and others, no-muss, no-fuss. With ongoing updates, articles, audio lectures, intensive dates and more can be maintained and quickly deployed by several administrators. Webworks is also responsible for all the content and creation of the Stuart Perrin YouTube Channel that includes the six-part series Becoming A Spiritual Warrior. Webworks is also responsible for the 12-part series Becoming Happy.

Webworks is also responsible for the layout and design of ten books authored by Mr. Perrin that are in print at Amazon in both print and Kindle versions.

The extraordinary work that Bob Sink did to develop my website shows clarity of mind, heart and purpose. His incredible ability to use the internet to bring spiritual teachings to the world is something I cherish. Thank you Bob. You have given myself and other people a great gift.
— Stuart Perrin, Meditation Teacher, Writer