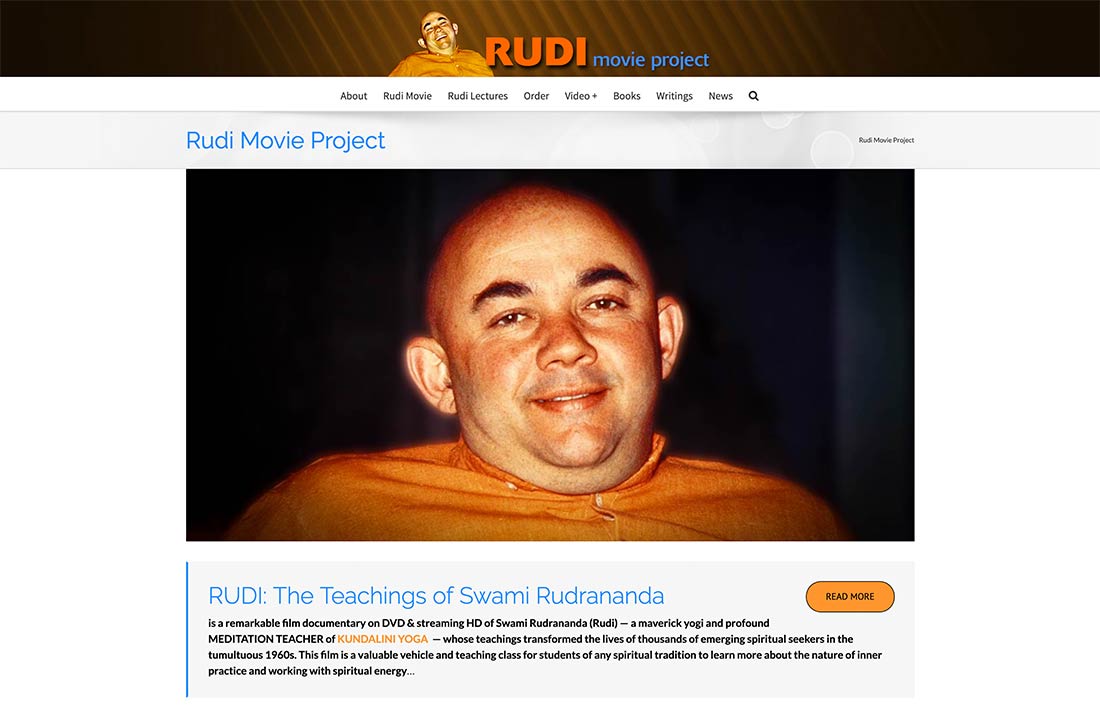 The Rudi Movie Project is a restoration initiative to transfer to DVD the 1981 16mm documentary of Rudi (Swami Rudrananda), a maverick yogi who taught Kundalini Yoga in New York City in the late 60s, early 70s. It came as a shock to everyone when Rudi died on February 21, 1973 in a small plane crash in the Catskill Mountains. RUDI: The Teachings of Swami Rudrananda is the only substantial filmed legacy of this remarkable teacher giving lectures and offering classes. Newly restored with many bonus features, the DVD is a valuable vehicle and teaching tool for students of any spiritual tradition to learn more about the nature of inner work.

The lengthy restoration process required the transfer of the original 16mm footage into the digital domain to capture the sharpest image possible. The newly-transferred footage was painstakingly reassembled in Final Cut Pro to match the original 1981 film edit. More than one-half the original footage had never been used, so new shorts were made, additional music was composed, subtitles in six languages were added, and many bonus features were created for the final DVD.

In 2016 the film was restored again to 1080p HD and made available for worldwide streaming on Vimeo on Demand.

The website for the Rudi Movie Project has transitioned through now FOUR incarnations. The first site in 2006 was set up as a fundraiser to help generate income for the restoration process, equipment & software expenses (four years before Kickstarter!). The site sought donations, and also sold restored audio recordings of Rudi’s lectures with over 40 hours of mp3s. A year later the website was reformatted as the finished DVD was available, selling both the audio recordings and the DVD.

Webworks created over the years an in-depth RUDI Movie Project YouTube Channel that featured trailers and excerpts from the documentary, and a companion Facebook presence. In the Fall of 2013 the site was updated yet again, this time to WordPress, bringing on board a new modern look and expanded pages. The latest and greatest incarnation in 2017 adopted a new and modern theme with a simplified and airy interface.